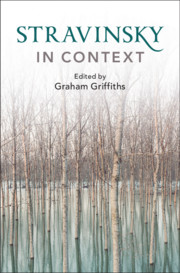 Stravinsky in Context offers an alternative to chronological biography. Thirty-five short, specially commissioned essays explore the eventful life-tapestry from which Stravinsky's compositions emerged. The opening chapters draw on new research into the composer's childhood in St. Petersburg. Stravinsky's early, often traumatic upbringing is examined in depth, particularly in the context of his brother Roman's death, and religious sensibilities within the family. Further essays consider Stravinsky's years in exile at the centre of dynamic and ever-evolving cultural environments, the composer constantly refining his idiom and re-defining his aesthetics against a backdrop of world events and personal tragedy. The closing chapters review new material regarding Stravinsky's complicated relationship with the Soviet Union, whilst also anticipating his legacy from the varied perspectives of publishing, research and even - in the iconic example of The Rite of Spring - space exploration. The book includes previously unpublished images of the composer and his family.